Case for draining traffic from MegaPu.sh

A couple of days ago I accidentally stumbled upon a grid of MegaPu.sh, they are selling traffic using push!

Push - as a source of traffic for me is new, I didn’t have a lot of experience with similar formats, so the article will be most useful for a beginner!

The first thing I decided to do was to pour on dating, the goal of the lead was not so complicated, usually it is a registration and this method well shows the quality of traffic in the grid.

The result surprised me a lot, the ratio was about 1:79, if I did not put such a high price for bid (0.03 $) with a minimum ($ 0.001), then I would calmly merge into a plus! Again, do not forget that there was no optimization, text from the translator.

Exactly the same on Canada. Got a low CTR

For 206 clicks I received 4 registrations, the purpose of the deposit was deposit, I stopped the company, because under this topic I need a good budget and creativity with a high CTR

If I chose an offer with payment for registration (approximately 150r), then it would be possible to even pour a plus.

I decided not to overtake popular GEO, I chose Vietnam and Colombia.

Creative and text was written according to the old scheme, I was surprised by the good CTR (apparently in the grid mostly peasants)

Open a small, apparently in the grid a little traffic for this GEO, and so could come out a full-fledged case =)

Welltox VN - skin whitening product. Excellent open, average CTR (but do not forget, I did everything in a hurry) Low bid 0,005 $ 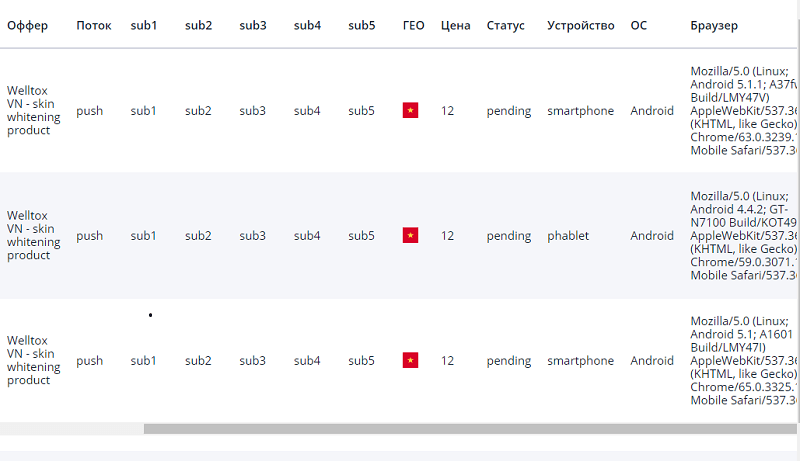 I got three leads at $ 12, but they are still pending (+ 4 lead went to trash) Honestly wanted to wait for an approve, but my hands itch to write an article. If at least one is recovered, the ROI will be 100%

P.S. As I poured into the dumplings

I chose an offer, I did not look carefully at GEO, I thought that all Europe was accepted and poured 2.5k clicks, my advice to you, check several times, is it okay before you start to drain the traffic.