The most important thing in advertising is time-sensitive and attractive high CTR creatives, especially in this information explosion era. In this sense, learning how to timely grasp the market trend to design effective creatives in the first place becomes the number one concern of every marketer. Luckily, we have Idvert to spy competitors’ creative ideas and learn from their advertising strategies, so as to improve our own efficiency.

In that, we will introduce the creativity and highlights of ads in different categories to help you find the inspiration.

At the first glance of the recent hot skincare ads, it is obvious that these kind of ads are generally using the pictures of middle-aged women, especially of female celebrities such as Cher Sarkisian and Jennifer Aniston as a pointcut, which can attract a lot of attention along with a gossip style entertaining copywriting.

For example, in the first advertisement, the 72-year-old Cher Sarkisian still looks radiant, and the EXCLUSIVE in the lower right corner makes people feel this is not an ordinary news, there must be some secret in it. The copywriting is plain but is easily to evoke people's curiosity about the gossip, so far, there’s not a single indication of any product promotion.

What’s more, a video ad made with images and two short links are attached. This method is very clever. According to the research, video ads have always been the most favored ad type of Facebook users, in case users do not want a video sound in public, you can get the redirects by the forms of video + short-link, this way you could also get more forwards so people can check it when they are free. So, what on earth does this advertisement sell?

Curiosity kills the cat, we clicked through the URL of the copy, and found that the page could not be opened, but in fact, the following picture is presented in Idvert platform with the help of our tech team. 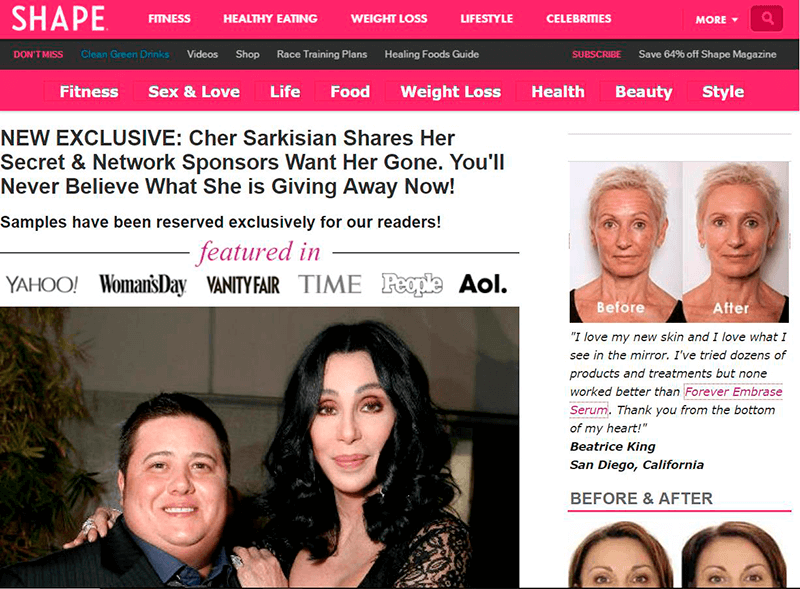 Don't regard this as a chance issue. In fact, there is a technology called cloaking in the advertising industry. That is, only a specific IP can see the real landing page which is also called the “money page”. If the target audience of the advertiser is in the United States, then, only the local US resident IP can see the real landing page. There’s not even a chance for the agency IP to see it. This kind of practice has become a commonplace especially in the BH industry.

So, the question is, how can we get the money page if we are not in the targeted regions of the advertiser? Don't worry, Idvert has resolved that issue and our pro+ and ultimate account users can directly download the money page with just 1 click.

Through the help of Idvert, we found that this is a wrinkle essence advertisement in the United States. The main target audiences are women over 35 years old. The real offer name of the advertisement is foreverembrase, and the interactive data continues to rise. It has generated 1600+ forwards and 300+ comments within just three days after the launch.

Why such a simple advertisement can get the attention of so many people? 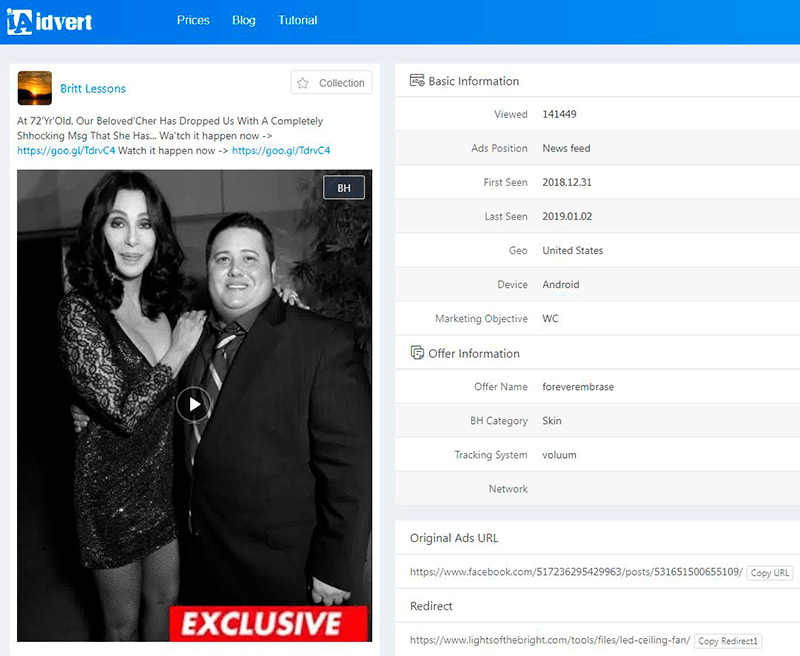 People age between 35-60 must also be interested in the stars of their age. Womens' gossip about the entertainment news is obviously much stronger than that of men, especially when they see a 72-year-old female singer with an appearance of around 30 or 40 years old. The curiosity of what makes her youthful forever can easily drive people’s desire to click through. Plus, the copywriting that this 72-year-old Cher Sarkisian is bring some explosive news to everyone, making it difficult for the audience to resist.

It has to be noted here that Cher Sarkisian is a household female star in Europe and America. She has been active since the 1960s and has received an Academy Award in the music, TV series and film industry, a Grammy Award, an Emmy and three Golden Globes.

Let’s continue to analyze the magic of this page and see how it makes customers pay. 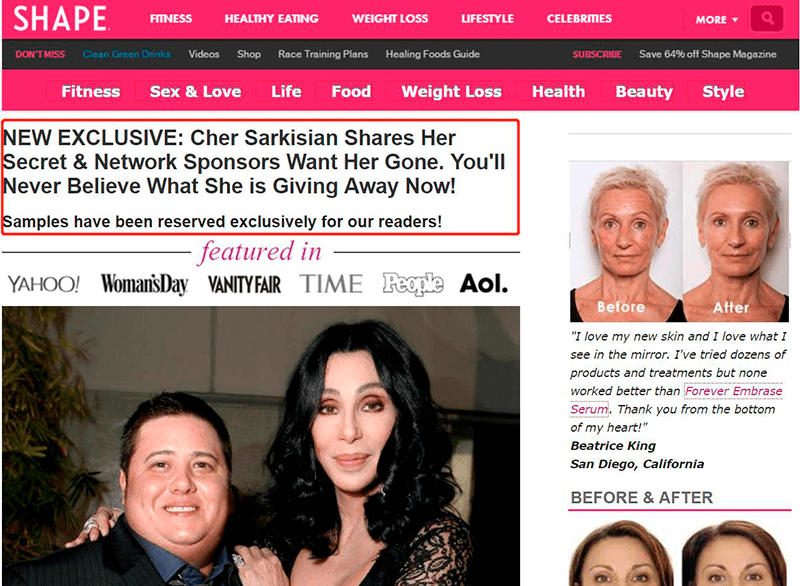 First of all, the title is very thoughts-provoking. New exclusive echoes the original advertising copy, so that the user has a continuous feeling. At the same time, the title says Cher Sarkisian will risk sharing the secret and only give the benefit to this article’s Readers, stirring people’s curiosity to continue. The media logos in the Featured in part also increases the reliability of the content.

Looking at the content, it’s possible that Cher Sarkisian has reduced the collaboration with the previous skincare advertiser because she used another cheaper but more effective beauty product and the skin condition is getting better after the usage. At the same time, it is mentioned a certain doctor also introduced other female stars in the program, and they have obviously improved after using the product. They also put on a very convincing comparison chart, which is quite attractive for a middle-aged woman. 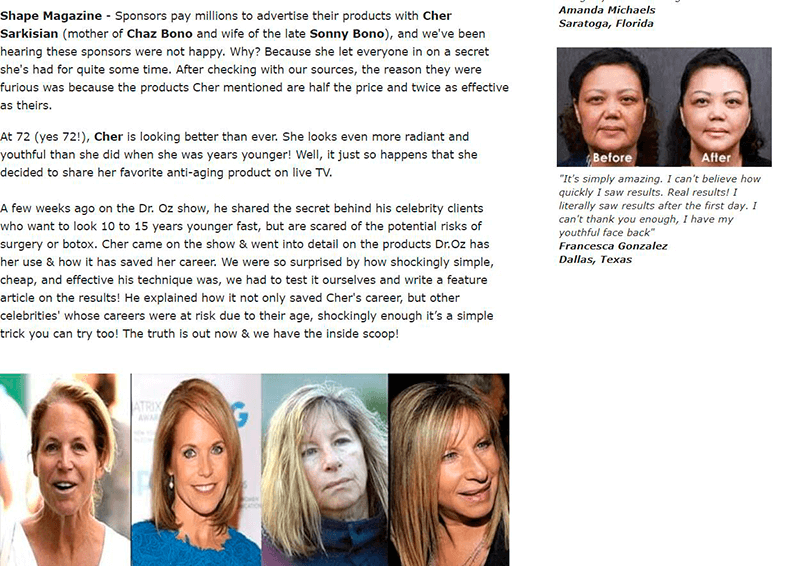 According to the doctor, it is better and more cost-effective to use this product than the aesthetic surgery. You spend thousands of dollars but still must bear risks for the surgery. However, a simple medical product can solve the problem one and for all, why not to give a try? Not to mention even the big stars give credit for it. 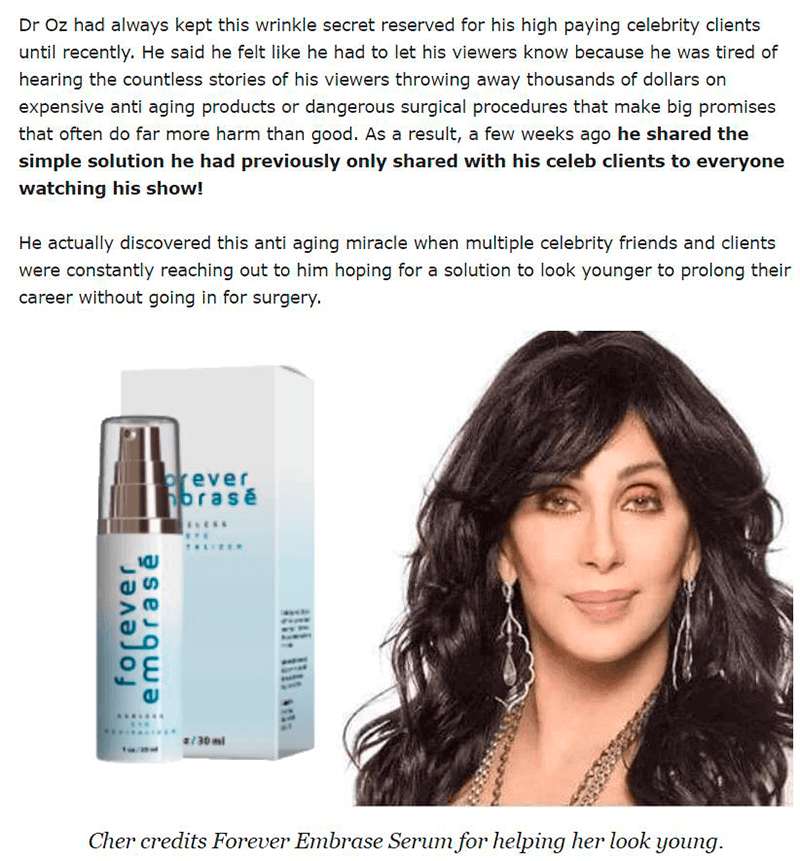 Use the material of the scientist + science program to explain the scientific theories and basis of the product, so that the efficacy of the product is more convincing. Here is the Doctor Oz Show, an American TV show named after the host's own name and popular in 118 countries around the world. This program not only attracts the attention of the global audience, but also helps countless of people to have a healthy lifestyle, it’s highly credible in the Western countries. 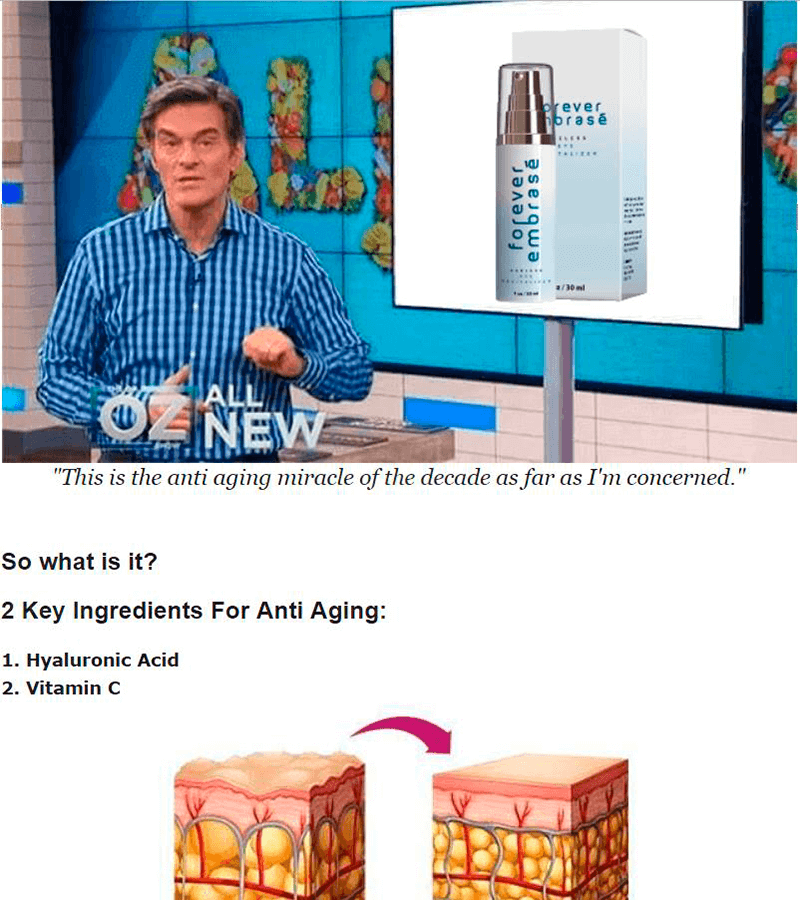 Speaking with facts may be more powerful than the previous elaboration. Ask a person to test the product and follow up the process and results to make the audience more substitutable and more willing to try. 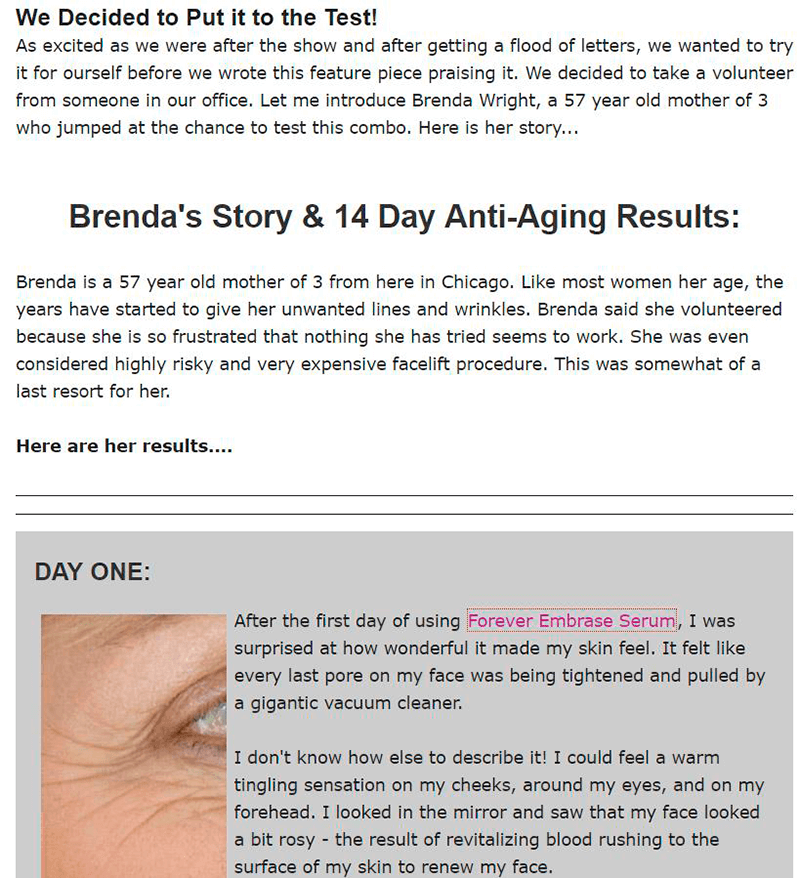 On the right side, the contrast between the buyer's show and the praise comments below help to further break the audience's psychological defense. The comment style is the same as Facebook, which makes users think they are still in the secure environment of Facebook and will feel more secured. 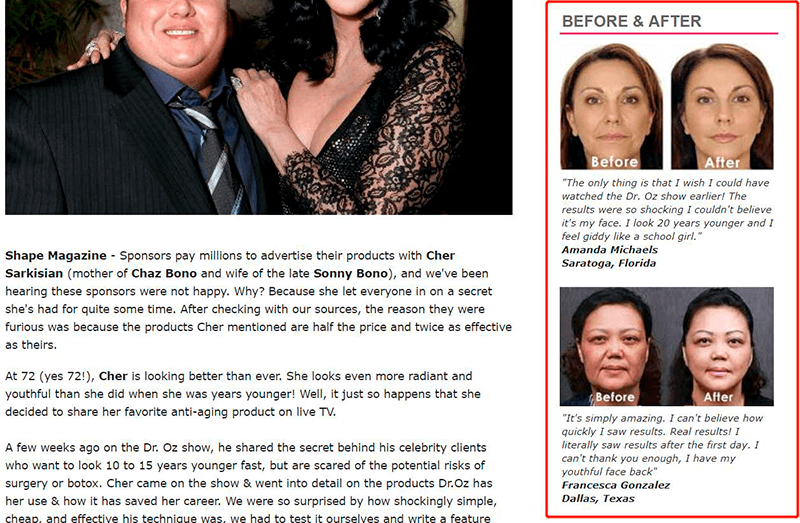 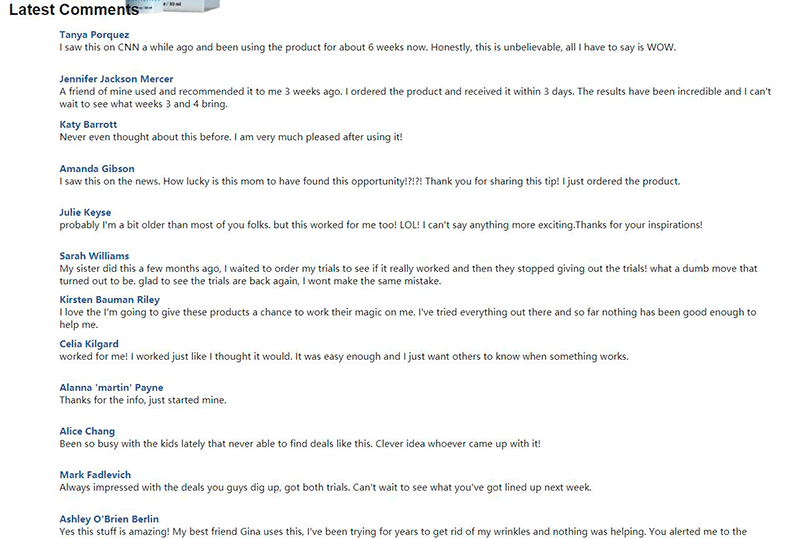 Maybe you will think that with the above four steps, the audience will pay for it without a doubt. In fact, many audiences will still be rational, so you can add another free trial application to improve the conversion and use Restrictive words like today, limited, only, let audience feel more haste about the sale. There’re only two free bottles left, a popular product recommended by the celebrities and TV program. All right, let’s give it a shot to see if it’s working since it’s free anyway. 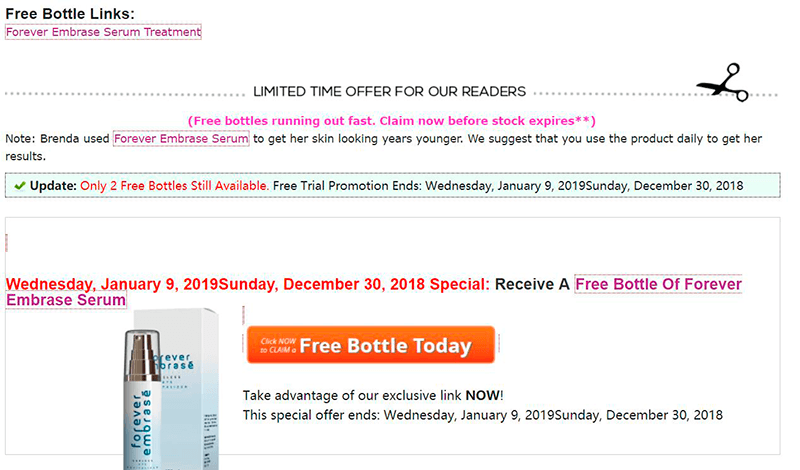 Finally, we came to the advertiser's product page. The limited-edition copy of the page makes the heart-felt audience more anxious, and may not remember that they are coming for free, so they rushed to place an order and complete a transaction. 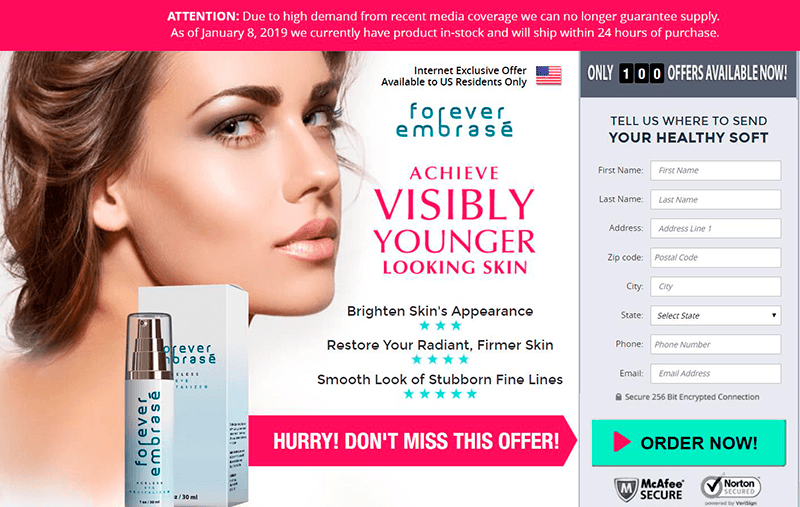 Fill in the information to see the payment interface, the tension is further upgraded, the top countdown and the low inventory warning prompted below are urging you to place an order, but by this time, it is no longer a free application, instead a $4.99 shipping cost is needed. But it still seems to be a cost-effective deal, so many people will choose to pay. After this, you’re congratulated to complete a deal.

To sum up, the skincare product audiences are generally woman over 35 years old. Gossip copywriting and creative are good pointcuts of the advertising strategy. Landing page should introduce Star Effect; Price Advantage; Scientific Proof and Real Person Test to break the defense line of the audience step by step, and finally use free trial to stimulate the deal. 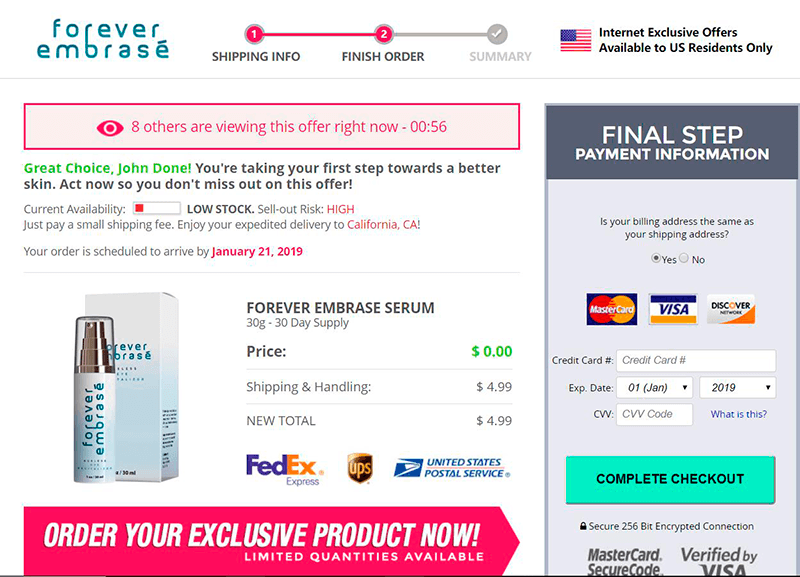 If you want to see more creative ideas and get money pages, check out Idvert now. 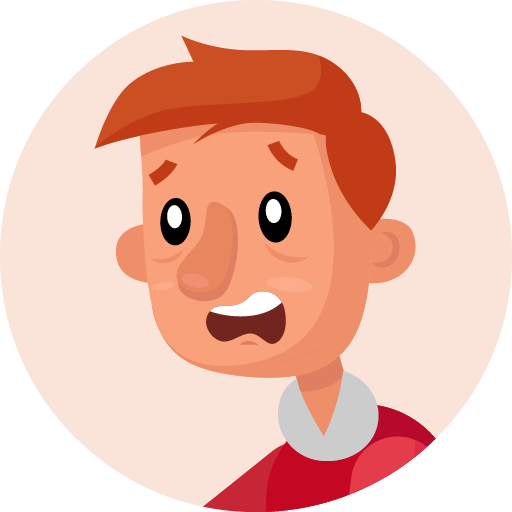 Hello, this is Idvert Content Team. We are focusing on sharing industry insights based on huge ad data analysis. Highly welcome any collaboration! Find us at email [email protected].