The Impact of Negative Publicity on Email Marketing Campaigns

Earning and maintaining customer trust and loyalty has become increasingly important for today’s brands. Indeed, whether it’s the result of a business scandal, data breach, company error, or a high-profile example of poor customer service, a loss of trust can transform how an individual perceives a brand, which can negatively impact customer engagement and, subsequently, it’s bottom line.

The importance of trust is reinforced by the General Data Protection Regulation (GDPR), which was enforced from May 25 2018, in a bid to improve data protection and transparency across all industries and markets. For brands, these regulations will tighten up how they process and manage their data, which will include how they recover from damaging events, such as consumer data misuse and breaches.

Whilst there are many repercussions that come to mind when considering the consequences of bad publicity – such as a dip in sales – there is often one overlooked consequence; the negative effect it can have on a brand’s email program.

The impact of bad publicity on trust

We know that bad press can have a significant impact on trust, but how can this be quantified and how does this impact an email program? Thankfully, due to email marketing’s ease of measurement, it is possible to determine the impact of negative publicity on brand reputation.

Take, for example, when ridesharing company Uber, was subject to a significant data breach in 2016. Usernames, email addresses and mobile numbers of customers were stolen during the breach. Following news of the hack, there was a visible decline in average email read rates. Indeed, before the data breach was announced, the company’s read rate was indexed at a score of 100, however, this reduced to 92% – a reduction of almost 1/10 –  following disclosure of the breach.  Deleted-after-reading rates also dropped by a fifth, whilst forwarding rates almost halved. The breach impacted Uber’s positive engagement in its email program significantly and it was clear that customers were concerned. 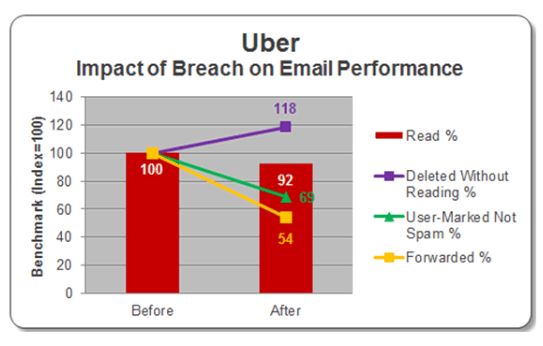 This isn’t surprising given that, according to a study from Ponemon commissioned by Centrify, 65% of customers affected by a data breach lost trust in that organisation, with one in four taking their business elsewhere. Meanwhile, the stock value of 113 companies studied declined an average of 5% the day a breach was disclosed.

Misuse of customer data can also dent a brand’s image, driving down email engagement in the process. Supermarket chain Morrisons was charged £10,500 by the Information Commissioner’s Office in 2017 for breaking the law on how people’s personal information should be treated when sending marketing emails.

In 2016, the supermarket chain deliberately sent 130,671 emails to people who had previously opted out of receiving marketing-related to their Morrisons More card. The emails invited customers to change their marketing preferences to start receiving money off coupons, extra More Points and the ‘latest news’ from Morrisons. In this case, responses to Morrisons’ marketing emails were significantly affected following news of the data protection non-compliance and misuse of people’s data being publicised, with a fourfold spike in email complaints when the story broke. 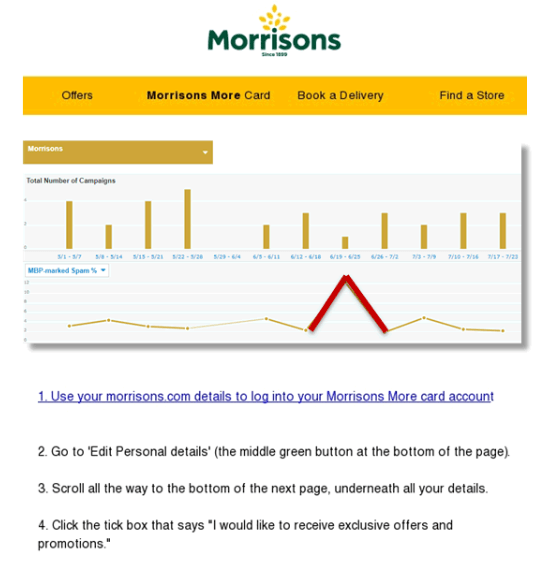 The recent Oxfam controversy is another good example of how negative publicity surrounding a business scandal can impact email program performance. Before the story hit the headlines in January, the charity’s email marketing program’s average spam complaint rate was close to 0% however, following the bad press this rose to 1.8% in February – 10 times higher than the average complaint rate.

A loss of customer trust, whether it’s the result of a data breach or another event that has generated bad publicity, can have an economic impact on brands in many ways too. Firstly, there is a direct relationship between deliverability and campaign revenue. Higher complaints mean lower inbox placement, which makes email marketing campaigns much less ROI effective.

Furthermore, the DMA has calculated that the average lifetime value of an email address is £28.56. Email addresses which complaint have to be suppressed, so there is an opportunity cost based on loss of future revenue. The DMA states that trust is one of the top three reasons that persuade consumers to share personal data with a brand (choice of marketing preferences and a clear privacy policy are the others). If they trust a brand, they are more likely to provide a primary rather than a secondary email address and, according to our own research, five out of six email opens are generated by primary addresses.

Coming back from negative publicity

Aside from the obligatory apology that should come when any negative event that impacts customer data occurs, businesses need to prove that they are transparent and honest with how they are handling their data. The good thing about GDPR is that this is going to be enforced, with non-compliance resulting in the possibility of very high fines.

To repair relationships with customers following bad publicity, it’s important marketers are clear and relevant in terms of messaging. Email senders should remember trust is earned, not given. Whilst a company scandal or brand crisis will likely knock consumers’ trust in the short term if a brand remains open and transparent in the wake of these incidents, it’s likely they will recover in the long run. Ultimately, marketing audiences built on a strong foundation of trust will have greater longevity, and yield more value, than those which aren’t.

The article was written by:

Leading Return Path’s Professional Services consulting team, Guy has a knowledge base that spans over 10 years and has worked with a broad range of international clients to improve their email delivery, subscriber engagement and revenue. Outside of work, Guy has had long-term involvement with both the DMA and IAB email councils.

Hey, my name is Uliana, I am here to provide you with the top affiliate content, starting from Facebook arbitrage to Push traffic. Ask me anything: ulia[email protected]